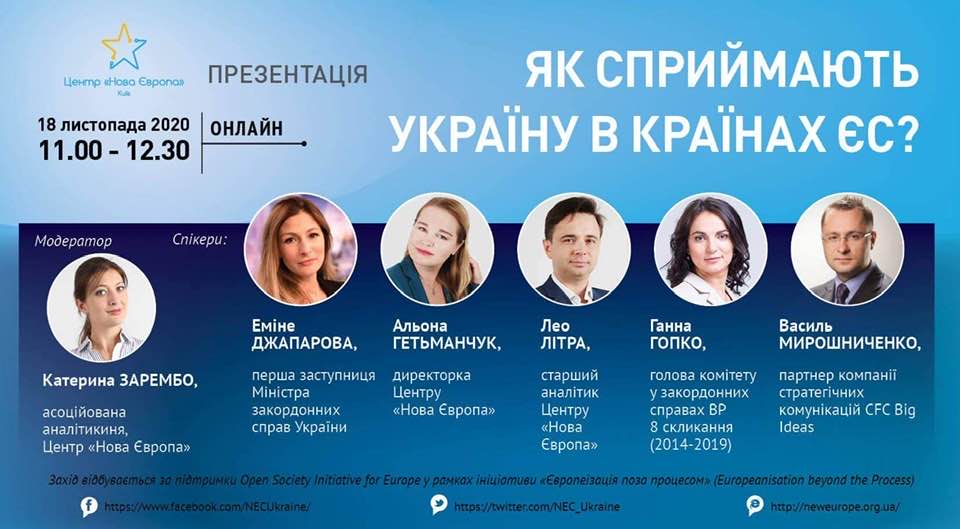 On November 18, Kateryna Zarembo moderated the presentation of the New Europe Center’s research “What is Ukraine’s perception in the EU?”

On November 18, the New Europe Center presented the results of a public opinion poll “What is Ukraine’s perception in the EU?” conducted in Italy, Germany, Poland, and France. Kateryna Zarembo moderated the presentation and discussion with the participation of Alyona Getmanchuk, Director of the New Europe Center, Leonid Litra, Senior Analyst of the New Europe Center, Emine Dzheppar, First Deputy Minister of Foreign Affairs of Ukraine, Etienne de Poncins, Ambassador of France to Ukraine, Hanna Hopko, Head of the Committee on foreign affairs of the Verkhovna Rada of the 8th convocation (2014 – 2019), Vasyl Myroshnychenko, partner of the strategic communications company CFC Big Ideas.

The most interesting findings of the survey:

The full text of the research is available here.

You may watch the video recording of the discussion here.